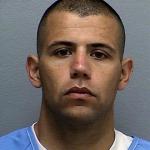 SONORA — A minimum-security inmate who walked away from the Minimum Support Facility at North Kern State Prison on Nov. 3 has been returned to California Department of Corrections and Rehabilitation (CDCR) custody.

At around 4:10 p.m. Nov. 24, agents from CDCR’s Special Service Unit (SSU) Fresno, with the assistance of SSU Bay Area, arrested inmate Daniel Lucas Salazar, 31, at a homeless encampment in Sonora. He was taken into custody without incident and transported to Sierra Conservation Center in Jamestown.

Salazar was discovered missing by custody staff on Nov. 3, at around 9:10 p.m. during an institutional count. Escape procedures were immediately activated, and notification was made to Kern County law enforcement agencies.

Salazar was received by CDCR in August 2016 from Tuolumne County to serve a three-year, eight-month sentence for second-degree robbery and use of another’s identification to obtain personal information. He was scheduled to be released in March 2018; his case will now be referred to the District Attorney’s Office for consideration of escape charges.