SAN QUENTIN — Condemned inmate Joe Henry Abbott, 48, who was on California’s death row from San Bernardino County, was pronounced dead on Wednesday, Jan. 31, 2018, at 4:09 p.m. at San Quentin State Prison. He had been found in his cell unresponsive at 3:23 p.m. Lifesaving measures were initiated, but Abbott passed away. The cause of death is unknown pending the results of an autopsy. Abbott was single-celled.

Abbott was sentenced to death by a San Bernardino County jury on Feb. 17, 2006, for the Oct. 30, 2000, first-degree murder and robbery of Samuel Saenz, a Brink’s armored car guard. Saenz had exited the Ontario branch of Bank of America transporting a large white bag to the armored vehicle. Abbott walked up behind Saenz and
fired two shots to the back of his head, knocking him down. After grabbing the bag, Abbott then walked over and fired a fatal execution-style shot to the back of the victim’s head before fleeing with his accomplices. He escaped with $202,282.90 that has never been recovered. On Nov. 15, 2000, Abbott turned himself in to the Los Angeles County Sheriff’s Department. 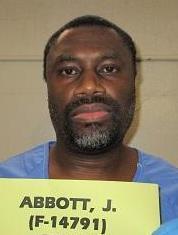