SACRAMENTO — A visitor who supplied a fatal amount of methamphetamine to an inmate has been sentenced to two years of incarceration, California Department of Corrections and Rehabilitation (CDCR) investigators said today.

“CDCR is committed to stopping the flow of drugs into our prisons,” said Bryan Shill, deputy chief of CDCR’s Office of Correctional Safety. “Our investigators will diligently pursue those who smuggle narcotics into any state correctional facility, and we will seek justice through aggressive prosecution of violators.”

On May 28, 2018, investigators began a probe into the sudden death of an inmate at California Medical Facility (CMF) in Vacaville.  Inmate Adrian Sepulveda, who was then 46, was received from Alameda County in 1997 and was serving a life sentence with the possibility of parole for second-degree murder. An autopsy revealed the inmate had swallowed multiple balloons filled with methamphetamine. Investigators from CDCR’s Bay Area Special Service Unit (SSU) and CMF’s Investigative Services Unit (ISU) determined Martinez-Meth visited the inmate shortly before his death.

Special agents from SSU, CMF’s ISU and CDCR’s Fugitive Apprehension Team served a search warrant on Aug. 2, 2018 at Martinez-Meth’s Clearlake residence and found items including methamphetamine, balloons and glue. She was taken into custody without incident. SSU and ISU worked in cooperation with the Solano County District Attorney’s Office on the case, resulting in the felony conviction.

“The cooperative effort between local law enforcement agencies, the CDCR Office of Correctional Safety and the California Medical Facility Investigative Services Unit has displayed a positive result in the battle to combat drugs from entering our institution,” said Acting CMF Warden Jared Lozano. “I am proud to work with a team that continues to show an unrelenting commitment to protecting our staff, inmate population and visitors alike.” 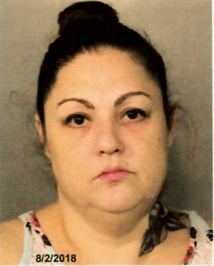