SANTA CLARITA – California Department of Corrections and Rehabilitation (CDCR) officials are searching for a minimum-security inmate who walked away this morning from Francisquito Conservation Camp in Los Angeles County.

Inmate Pete Vega was last seen at the camp by staff at 7:15 a.m. on May 10 in the dining hall during the morning meal. He was discovered missing at 8:30 a.m. during a routine count before inmates were to report to work.

CDCR’s Office of Correctional Safety, CAL FIRE, law enforcement personnel, along with local law enforcement agencies and the California Highway Patrol were notified and are assisting in the search for Vega.

Vega, 34, is a Hispanic male, 5’ 10” tall, weighing 164 pounds, with brown eyes and black hair. He was received by CDCR from Riverside County in June 2018 with an eight-year sentence for two counts of possession of a controlled substance for sale, possession of a firearm by a felon and vehicle theft with prior vehicle-related theft convictions. 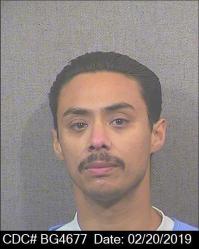