LANCASTER — California Department of Corrections and Rehabilitation (CDCR) officials are looking for a minimum-security inmate who walked away from the Minimum-Support Facility (MSF) at California State Prison-Los Angeles County (LAC) on Saturday, Oct. 28.

Inmate Jason Kohr, 36, was discovered missing during an institutional count at 9 p.m. Oct. 28. He was last seen during 4 p.m. count and during the evening meal. On-duty staff immediately began searching the surrounding areas. Notification was made to local law enforcement agencies and agents from CDCR’s Office of Correctional Safety were immediately deployed to locate and apprehend Kohr.

Kohr is a white male, 5 feet, 10 inches tall, weighing 187 pounds with hazel eyes and a shaved head. He was received by CDCR from Ventura County in May 2016 with a six-year term for vehicle theft, attempting to evade a peace officer while driving recklessly, and second-degree burglary. He was scheduled to be released in July 2018.

Anyone who sees Kohr should immediately contact law enforcement or call 911. Anyone knowing the location or having information about Kohr is asked to contact the LAC Watch Commander at (661) 792-2000, extension 5551 or 6912. 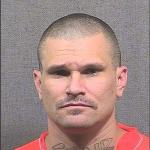